Maslenitsa, or the Pancakes Festival

The City of Kaliningrad

Maslenitsa, the week of Festivities

Maslenitsa has always been celebrated, even during the Soviet times when all religious holidays were banned. People would then observe the festive side of the holiday, prepare pancakes and gather together with friends and relatives. But before that time, the week was important in many ways, social and religious. For that reason, people would not only gather and celebrate the end of winter, the return of life after a harsh winter, but also show their love to close relatives and ask for forgiveness. The week of Maslenitsa was traditionally scheduled as follow: 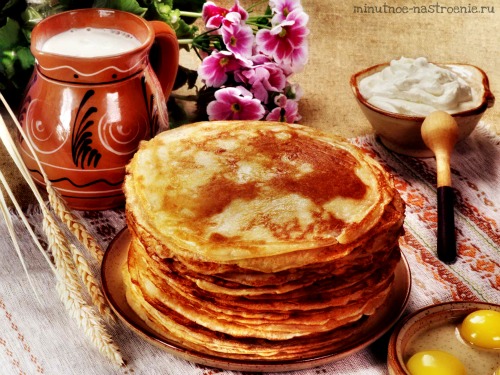 On that day, children and grown-ups assemble чучело Масленицы (the Maslenitsa doll or “Lady Maslenitsa”) из соломы (out of straw), and colourful pieces of rags. Then they place it on a pole and carry it around the village. The first pancakes are prepared and they are usually offered to the beggars in honour of the memories of dead relatives.

On this day, young men are looking for a fianc?e. The whole week, they will look out for a girl to marry just after the Great Lent is over.

Everybody stop working on that day, and spend the day playing outside games such as snow fights, sliding on the ice. Hand to hand fights traditionally take place to commemorate Russian military history.

Sons-in-law invite their mothers-in-law for dinner. As a tradition, the son-in-law will personally send an invitation the day before, and the next morning he will send a “delegation” to confirm it. The bigger the delegation, the more respect he has for his mother-in-law.

In Russian, золовка (sister-in-law) comes from the word зло (evil). This gives you an idea of how tense the relation often were between невестка (sister-in-law or the brother’s wife which also means outsider) and sisters. So on that day, young wives would invite their sisters-in-law, and try to win their favour.

Apply for one of our programs and learn Russian with the best teachers qualified in teaching Russian as a foreign language.

On Sunday, close relatives and friends ask each other for forgiveness for all the offences and troubles they might have brought during the year. Young couples visit their relatives and offer them small presents.

By the end of the day, people gather and burn down “Lady Maslenitsa”. And when her ashes have been buried under the snow, the Great Lent began.