Ivanovo, the Textile capital of Russia

The Barber of Siberia

It is possible to go from Yaroslavl to Kostroma by train, by bus or by boat. Город стоит на месте слияния Волги с рекой Кострома (the city is built at the confluence of the Volga river with the Kostroma river) which gave its name to the town. Kostroma was founded in 1152 by Prince Yuri Dolgoruky. According to the legend, the first stone church was built in Kostroma’s Kremlin in the XIIIth century. However there are no monuments left from this period.

Like the other north-east cities of old Russia, Kostroma has been destroyed during the Mongol invasion, and later, during the Polish-Lithuanian invasion. The city also had to face the rivalries and struggles of the different principalities. It was looted by robbers sailing down the river in the land of Novgorod. Однако никогда победы над костромчанами не давались врагам легко (but the inhabitants of Kostroma never offered an easy victory to brigands).

In 1262, after the Mongol invasion, the refugees hidden in the forests around Kostroma revolted and defeated the Mongol army in the battle by the Saint lake. Это произошло на 100 лет раньше победы московского князя Дмитрия Донского на Куликовом поле (this happened more than an hundred years before the victory of Moscow’s prince Dmitry Donskov in Kulikov).

In the centre of the city you can see a monument dedicated to the peasant Иван Сусанин (Ivan Susanin) in memory of his exploit. During the winter of 1612, he promised to take a detachment of Polish knights to the Ipatiev Monastery by a “short cut”, and deliberately drove them in the swamps. Neither the Polish troops or Ivan Susanin were seen again.

The architecture of Kostroma

In 1773, Kostroma was devasted by a great fire. A new city has to be rebuilt according to a plan confirmed by Catherine II. It is said that Catherine II разложила на столе веер (drop her open fan on the table) and asked the architects to follow her plan. Thus the city was rebuild with street radiating from a single point almost on the bank of the Volga.

Three main ensembles form the centre of Kostroma: a cathedral that has been erected on the ground of the old Kremlin, a complex of trading buildings, the largest one remaining in Russia from the XVIII century and a complex of public buildings. In the central part of the city, a considerable number of residential buildings belonging to merchants has also been preserved.

The architecture of these buildings gives the city a special shape. Основная часть этих построек двухэтажные особняки (they are mainly two-storey private residences), built in a classic style and generously decorated with columns and ornaments.

Кострома является излюбленным местом российских кинематографистов (Kostroma is one of the favourite shooting place for Russian film directors). It starred many films, including the work of playwright А.Н. Островский (A. N. Ostrovsky). Ostrovsky’s estate, which has became a museum, is located near Kostroma.

Ипатьевский монастырь (the Ipatiev Monastery), founded at the end of the XIII century. Существует несколько версий его основания (there are several versions concerning its founding). According to one of them, the monastery was founded in 1275 by великий князь Василий Владимирский (the Grand Duke of Vasily Vladimirsky). In another version it is said that it is the work of Prince Chet, a warlord Tatar who, in 1330 converted to Christianity and became the founder of the clan Godunov.

In the XVI century, when Godunov ascended to the throne, the monastery received huge sums of money. At that time the Ipatiev monastery had majestic stone structures, imparting it special status.

Монастырь занимает важное место в истории России (the monastery has an important place in the Russian history): in its library was discovered the Hypatian Codex, which is the main source of our knowledge on the history of ancient Russia.

Марфа Ивановна Романова (Marfa Ivanovna Romanova), mother of the futur Tsar Mikhail Romanov (founder of the Romanov dynasty) was forced to exil here with her son during Boris Godunov’s repressions. This is in this monastery that они получили известие об избрании Михаила царём (they received the news of Mikhail’s election to the Russian throne) in 1613. 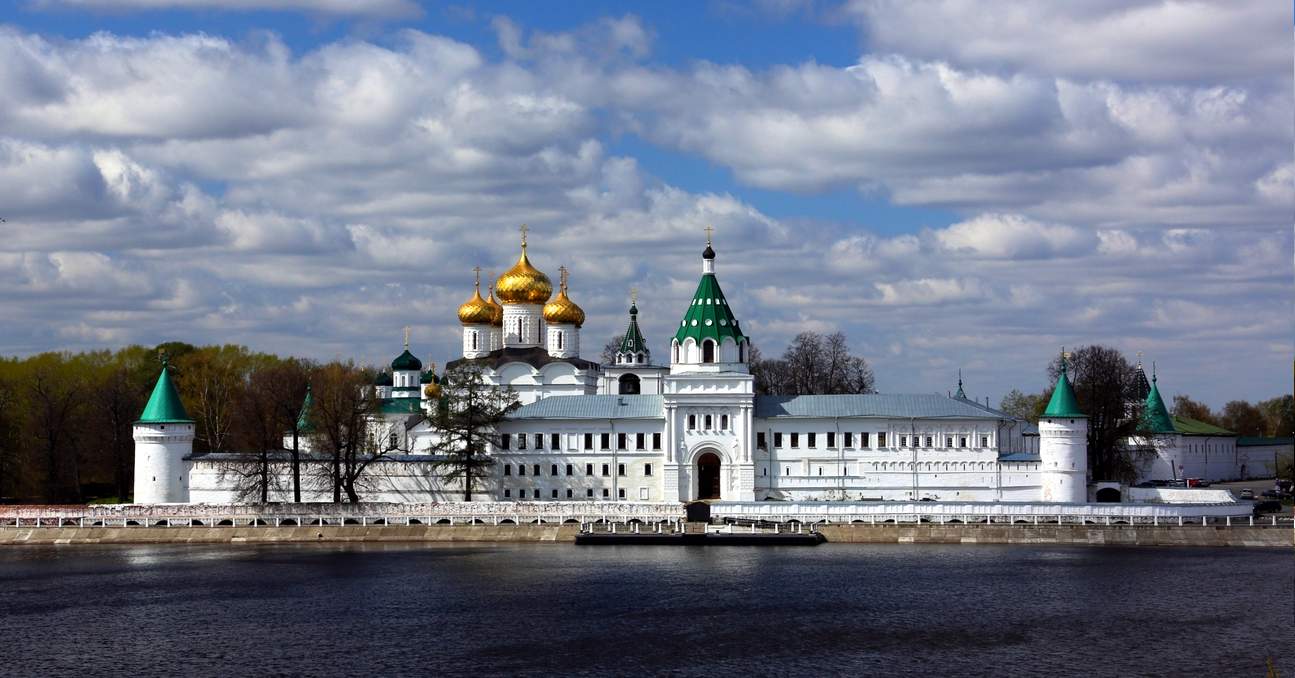