The Kremlin of Moscow (part 1)

The Kremlin of Moscow (part 2)

Here you can read the first part of our article about the Kremlin.

Next to Ivan the Great Bell tower you can see the Tsar Bell and the Tsar Cannon. The Tsar Cannon, the largest cannon in the world, was cast in 1586. It is 5.34 meters long and weighs 39.312 tonnes. Название Царь-пушки связывают с изображением царя Фёдора Ивановича, сына Ивана Грозного (The name of the Tsar Cannon is associated with the image of Tsar Fedor Ivanovich, son of Ivan the Terrible).

Tsar Cannon was never used as a weapon, and though it had been moved on several occasions it didn’t give a single shot.

The Tsar Bell has been standing on its white stone pedestal at the foot of Ivan the Great tower for more than 150 years. Это уникальный памятник русского художественного литья XVIII века (It is a unique monument of Russian art of casting of the 18th century).

On the Borovitsky hill, on the Kremlin territory stands the Grand Kremlin Palace. It was built between 1838 – 1849 and became the temporary residence of the imperial family. Although the Palace is seems to be a three storeys building, it has actually only two floors.

Close to the Borovitsky Gate, you can see the Armoury chamber, which was specially built as a museum in 1851 by the architect K. A. Thon. But before that, from the 16th until the early 19th century, the ancient Kremlin Armoury was the place were was kept the great treasure of the Moscow Princes and Tsars.

Now, the Kremlin Armoury is the oldest museum of the country, in which is kept a treasure of unique monuments of material and artistic culture. Здесь находятся лучшие произведения русского и зарубежного прикладного искусства (Here you can see the best work of Russian and foreign applied art).

The present name of the museum refers to the Kremlin’s workshop from 1508, where cold steel and guns were produced.

Between the Komendantskaya Tower and the Troitskaya Tower, stands an interesting civil construction from the middle of the 17th century, the so-called Amusement Palace. It was built in 1652. In the 19th century the commandant of Moscow lived here. Потешный дворец – это единственный сохранившийся в Кремле архитектурный памятник боярского жилья (The Amusement Palace is the only surviving architectural monument in the Kremlin of the boyars housing).

The Arsenal is situated between the Nikolskaya Tower and the Troitskaya Tower. It was built on the order of Peter the Great as an armoury. After the defeat of Napoleon, the building was restored in order to house a museum and though it never happened, the cannons remained on display along the building. 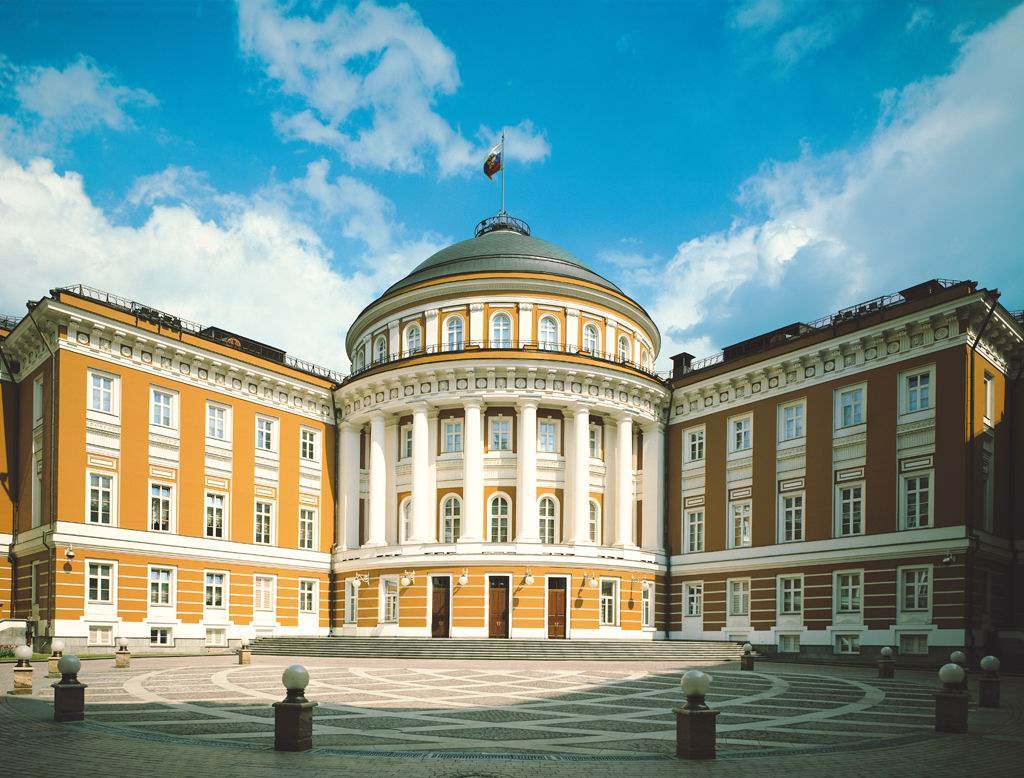 The second largest building in the Kremlin after the Arsenal is the Senate dating from the end of the 18th century. The Senate has the form of a triangle with cut off corners and three courtyards. Vladimir Lenin lived here after the 1917 Revolution, Joseph Stalin has his office in this building. Nowadays, the employees of the Presidential administration work in the Senate.

Not far from the Spasskaya Tower you can see the residence of the President of Russia. It is the first construction inside the Kremlin territory to be built during the Soviet era. It was built in 1932 – 1934. In 1958, the interior of the building was renovated to house the Kremlin theatre with 1200 seats.